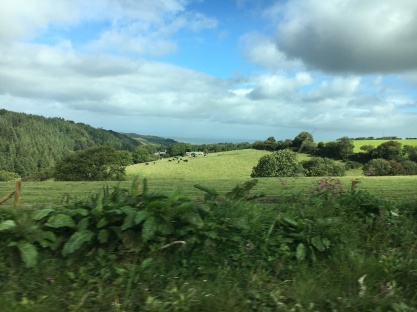 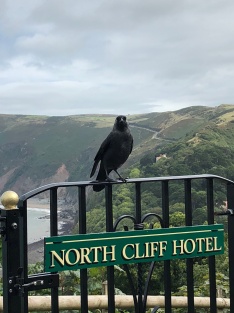 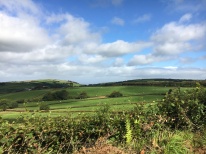 If Venice is an unsustainable city because of the throngs of tourists and other issues I raised in the last blog post, its neighbors to the east offer a different approach.  Just over the border is the capital of Slovenia, Ljubljana, which seems committed as a city to low waste and sustainable living in transportation, waste and food.  It is a remarkable contrast.  We flew into Venice to get to Ljubljana, and took a shared shuttle ride 2 hours  to arrive in one of the most livable and sustainable cities I had ever been in.  The city center has been closed to traffic (except for a few hours in the morning for deliveries to the stores) and the result is a pedestrian friendly place where walking people have reclaimed the urban landscape.

The tourist train that takes you around the city to show the sites is electric powered and claims zero emissions since it is largely charged by alternative energy systems. 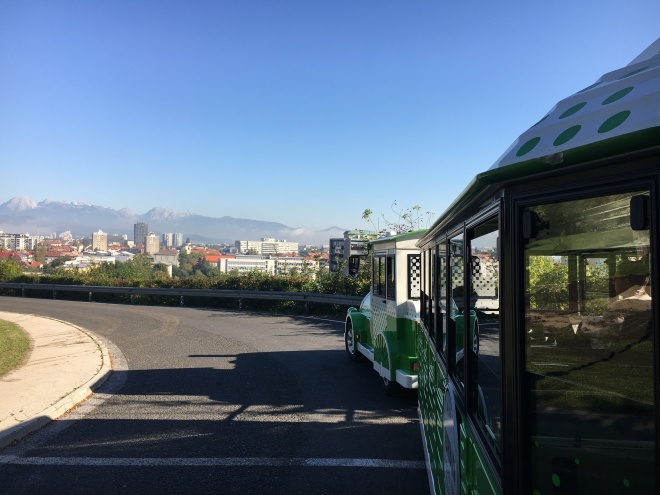 They have a well developed “borrow-a-bike” system throughout the city with stations where you can enter a code, “rent” a bike (free for the first hour and minimal charge per hour after that), returning it to any other station around the city when you’re done.

Whether they use the rent-a-bike program or provide their own, biking around the city is a form of transportation for young and old alike. 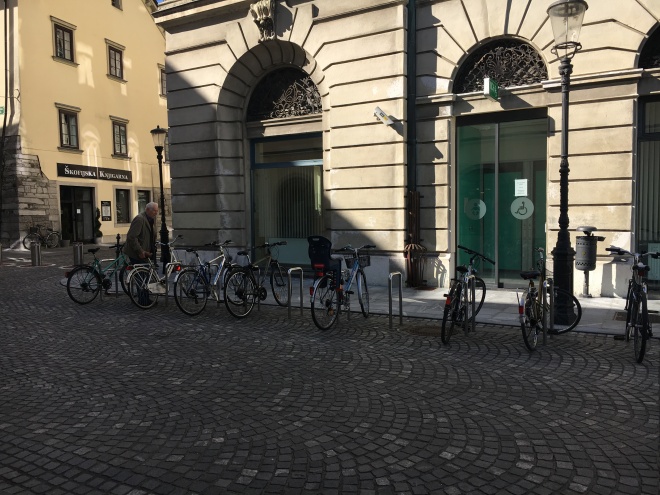 Where cars are allowed, outside the pedestrian zone, there are ample places to recharge an electric car, if you have one.  This makes the possibility of electric cars far more practical as a commuting vehicle in and out of the city. 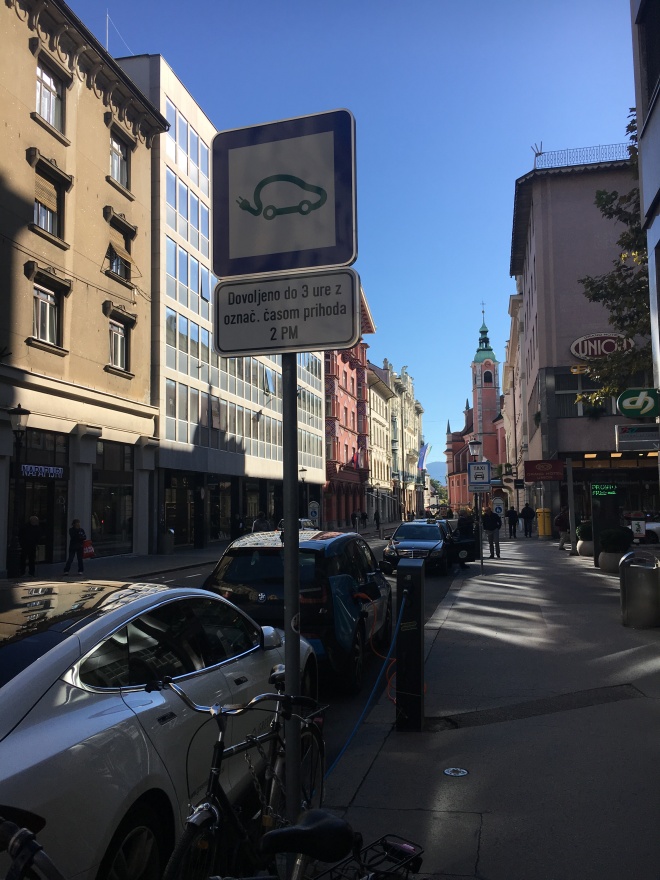 Waste, which can be such a problem in other cities, is carefully managed through an extensive network of recycle bins that can be found anywhere in the city and throughout the rest of the country as well.  Every waste barrel in a public area offers at least three choices for solid waste, plastics and papers. 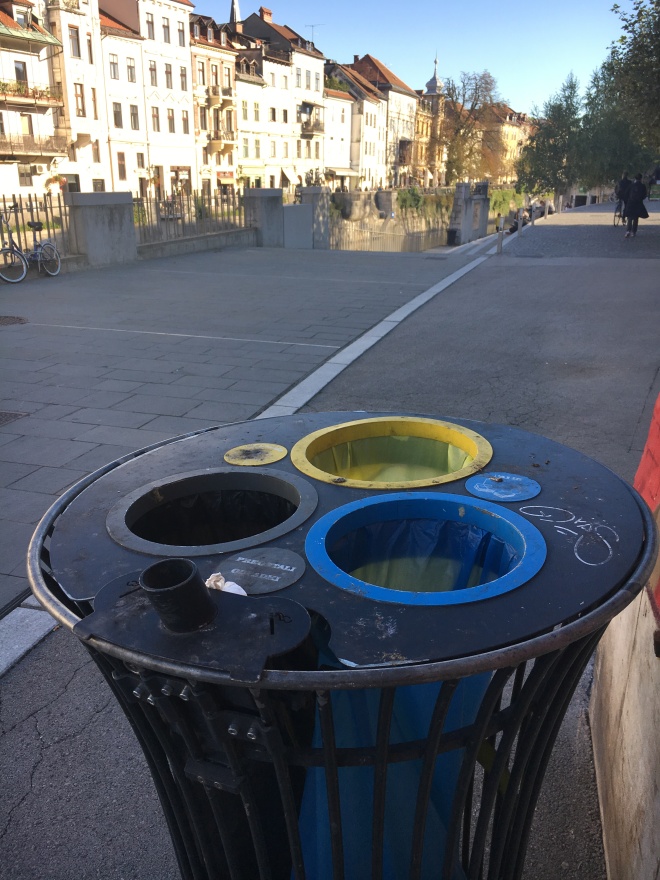 Usually, they offer instructions as well on how to determine where trash should go in the various bins.  They are uniformly color coded throughout the country to develop a consistent message that is easily distinguishable for the residents and visitors alike.

The results of this effort are clean streets and a reduced waste stream heading to the landfills.  More and more material can be reused through this effort.  The garbage collection for most city neighborhoods is not the standard affair of hauling a large bin out to the street for pick up on a specific day each week by a trash truck willing to spirit away your waste problem so you no longer have to think about its impact.  Rather, there are sets of bins located throughout the city that offer a different bin for each of the different types of waste.  There are bins for plastics, paper, glass, organic materials, metals and all that’s left over goes in an “unsorted” waste bin.  Only the later ends up in the landfill.  Residents haul their waste to these bins in the street and sort them into the appropriate bin in an effort to create a zero waste/emissions city by the end of the decade.

Sustainability in a city starts with the dedication of space within the city to produce food for the inhabitants to avoid creating “food deserts” in the inner cities (a problem that plagues most current US cities of any size).  Such a lack of fresh local produce in these “food deserts” forces those cities to use more fuel to bring in food, in turn rising prices, and adding to the emissions from the trucking.  As an added challenge, without local gardens in the city, the citizens can become disconnected from their food source and the knowledge of what it takes to bring that food to them.  This is not the case in Ljubljana.  Just across the river from the city center is a neighborhood that grows most of the fruits and vegetables that supply the open air markets and provide food for the people living there.

The market in the center of the city is open every day of the week providing a rich, healthy and diverse source of food; locally produced and fresh.  The ability to talk to the growers at this market adds to the sense of community and connection to the landscape. 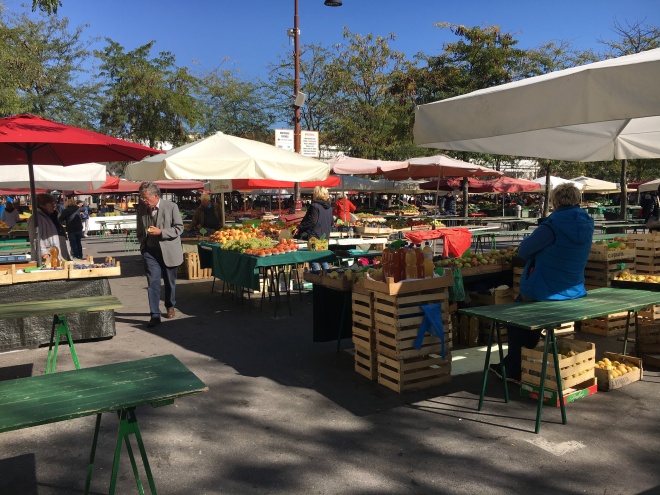 You can even buy milk from a vending machine which allows you to bring your own bottle and fill it from a refrigerated compartment filled daily by local dairies located at the outskirts of town.  This avoids the need for every grocery store to create a refrigerated space to manage such basic needs by trucking in milk from farms far away from the point of distribution.

The sustainable efforts of Ljubljana are by no means perfect, but they show a conscious effort on many levels to reduce their impact on the environment while raising the health and quality of life for their residents and guests alike.  What a difference a few hours travel can make from Venice to Ljubljana!

Speaking of travel, we have been trying to do our part to tread lightly across the landscape while on this sabbatical sojourn.  In this last picture (below) on the banks of the Ljubljanica River flowing through Ljubljana, Paula and Erin model our efforts.  For this three month trek, we have limited ourselves to a backpack (no bigger than the one Erin is wearing) and a carry on suitcase (all three at their feet) for each person while we move across Europe from the shores of the Mediterranean to the tundra above the Arctic circle.  So far so good…but of course, the key to sustainability is making it last.